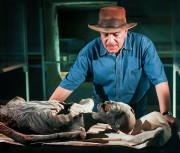 On the morning of January 25, 2011, Dr. Hawass first learned that the unrestrained social Revolution in Cairo had eroded into the looting of valuable artifacts and antiquities from his cherished Cairo Museum. Images of violent riots and fires all around his beloved city filled the local television newsreels. Realizing that Police and Military forces were largely preoccupied with other parts of the city, Hawass went directly to the Museum on foot. To his astonishment, he discovered an organized group of citizens surrounding the building, arm-in-arm. Their intention: to do what was necessary to protect the country's cache of cultural assets.

"We were thrilled to discover the Tombs of the Ancient Builders, and to find new information about the secret doors found recently inside of the great pyramid of Khufu,"

Filled with pride, Hawass entered the museum to witness for himself, the extent of the destruction of the exotic historical treasures that have entranced the globe since Howard Carter and Lord Carnarvon discovered King Tut's tomb nearly 100 years ago.

Dr. Hawass will come to the Los Angeles County Museum of Art (LACMA) Sunday August 30th at 2:00pm to discuss the effects of the social upheaval on the preservation of Egypt's cultural assets, and the raiding of one of the world's most famous Museums in Cairo. He will also share the discoveries of new tomb sites that have been excavated since the 2011. These discussions will be followed by a signing of his two latest books "Pyramids: Treasures, Mysteries, and New Discoveries in Egypt" and "Secrets from the Sand".

“I am excited to reveal the many new insights about the Great Pyramid and the Sphinx,” stated Hawass in a recent private announcement. “We were thrilled to discover the Tombs of the Ancient Builders, and to find new information about the secret doors found recently inside of the great pyramid of Khufu,” he added.

During this upcoming presentation, Dr. Hawass will introduce the discovery of the family of King Tut and how he died. He will cover the discovery of the mummy of Queen Hatshepsut (the only female Pharaoh in Egyptian history), and the search for the remains of Queen Nefertiti. Hawass will also include photos and information about the quest for Cleopatra and Mark Antony's tomb.

Dr. Hawass is familiar to many as “the guy with the Indiana Jones hat” that has appeared in hundreds of ancient Egypt-related documentaries, books and articles for the past several decades. As the former Secretary-General of the Supreme Council of Antiquities, as well as the first Minister of State for Antiquities in Egypt, Hawass has overseen all excavations that have taken place for over 3 decades.

Hawass received his BA from Alexandria University in Greek and Roman archaeology and a diploma in Egyptology from Cairo University. His MA and PhD were granted by the University of Pennsylvania, where he studied as a Fulbright fellow. Additionally, Dr. Hawass has received five honorary doctorates from various foreign universities. He has written more than 40 popular and academic books and more than 150 scholarly articles on his excavations, as well as innumerable pieces for Arabic and English newspapers and magazines.

Early in his career, he became concerned with the haphazard methodologies of preserving the precious antiquities. Setting in place a variety of policies and programs to protect and conserve the country's extensive inventory of antiquities, Hawass created a 'template' that many countries have since followed with the hopes of saving their own cultural antiquities from eternal loss.

“It is time to catch the world up on the myriad of new archaeological discoveries made in the past several years in Egypt,” said Hawass.

This event is open to the general public. Tickets are available for purchase in person and online. For more details about this upcoming event, please visit: www.DrHawass.com and http://www.lacma.org/event/pyramids-mummies-and-cleopatra.